The Senate of Adamawa State University, Mubi has approved the EXPULSION of Thirteen (13) Students for their involvement in various forms of MISCONDUCT ranging from cultusm, Examinations Malpractice and other acts of Misconduct.

The expelled students consist of eleven (11) Students that were involved in Cultism and Misconduct, while two (2) were involved in Examinations Malpractice in the First Semester 2020/2021 exams. 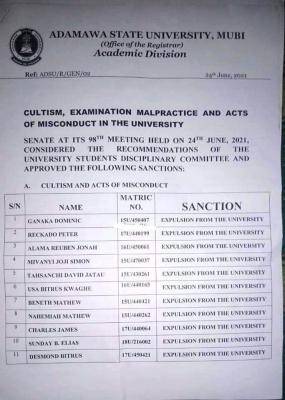 The decision to expel the Students was taken at the 98th Senate Meeting held on 24th June 2021 following the consideration of the recommendations of the Students Disciplinary Committee.

In a statement released from the Secretariat of the Senate and signed by the Academic Secretary, the concerned students were advised to surrender all University properties in their possession and Vacate the Campus with immediate effect. The statement further stated that any of them found on the University premises will be handed over to security agents.

Other students involved in other acts of Misconduct were suspended for two semesters with effect from 2nd semester 2020/2021,while others were served with Warning.

OYSCATECH notice to HND I students on submission of transcripts

I have ambition to bag PhD – Omoba, visually-impaired teacher with Master’s degree