Osun Commissioner for Education, Hon. Folorunsho Oladoyin has urged students in the state to draw inspiration from 19 years old Adbdulwasiu Kamarudeen who scored 350 in the last Joint Admissions And Matriculation Board (JAMB) exams.

Oladoyin described the young Kamarudeen of Al-fareed College, Ede as a pride to his teachers, parents and the state at large, saying the entire state is happy to be identified with him. 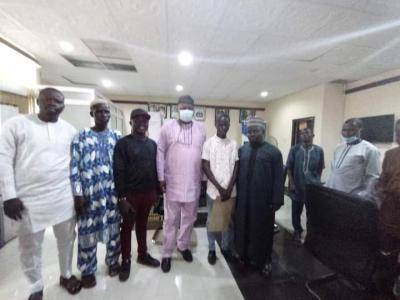 The Commissioner stated this today while playing host to the outstanding pupil together with his parents and teachers during a courtesy visit in his office.

Oladoyin said the sterling performance of Kamarudeen, though a private school student goes a long way to show that something remarkable is going on in the state’s education sector, stressing that the intervention of the “OLUBEWO” is beginning to yield positive results.

The Commissioner said the administration of Governor Adegboyega Oyetola will continue to do everything possible to ensure that the younger generation who are the future of the state continues to get the best in terms of quality education.

He said, “We are determined to produce more of Adbdulwasiu Kamarudeen in our state, the intervention of the OLUBEWO in both public and private schools across our state is beginning to pay off.

“It doesn’t matter wether the pupil is from a public or private school, this is a pride to us as a state and we are proud to be identified with this. I use this opportunity to tell other young people to take this as a challenge. I know we can produce more of this brilliant student and we are determined to do that”. The former Lawmaker stressed.

Earlier, the young Abdulwasiu Kamarudeen thanked the state government of Osun through the Commissioner for the honour of receiving him, his parents and his teachers.